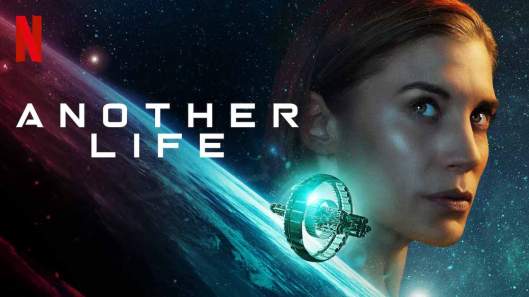 ‘Another Life’ is a 2019 series from Netflix. It stars Katee Sackhoff, Samuel Anderson and Selma Blair, along with a very large supporting cast. The 10 episode series first became available for streaming in July 2019.

This series is a bit of a mess. The core story is actually very good, an alien artefact lands on earth and we follow both those trying to decipher it and the crew of a ship sent out to find it’s origin.

Where the series falls down are the subplots. The many many many many subplots. Every character has issues and their own plot. Most of which are picked up and dropped and never referred to again. This padding makes some episodes drag, and makes the whole experience of watching tiresome.

As I said the core story is there, and it would have been a great series had that been the driving force. However instead we get sidetracked into a boring love triangle subplot, a separate and ignored love triangle plot, an episode devoted to a flashback, multiple instances of characters being introduced only to die very quickly and two instances of everyone getting high unwittingly.

The knock on effect of all this is the series finale. It’s rushed. We finally seem to be getting somewhere, the main plot is moving on but to make room for all the extraneous baggage you get half an hour of this. The result is that the cliffhanger ending loses all of it’s punch.

I can’t recommend ‘Another Life’ while entertaining it loses the audience and each episode becomes more of a car crash than the last. The series ends on a cliffhanger teeing up a second series, and I am staggered that Netflix has renewed it for a second season.