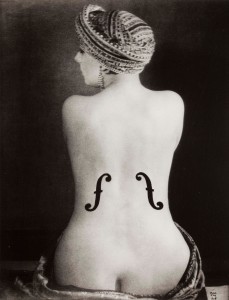 ‘Le Violon d’Ingres’ is a gelatine silver print by the American born artist and photographer Man Ray (1890-1976). It features the artist and model Alice Prin (1901- 1953) better known as Kiki de Montparnasse posing in a style modelled after the classical nudes of the artist Jean-Auguste-Dominique Ingres (1780-1867) whom Man Ray greatly admired.

In the picture Kiki is nude with the her back to the viewer and her arms hidden by her torso, she sits on a shawl that is wrapped over her lap on her head is a turban. However the most striking thing are the two violin style F holes painted on her back. In effect turning the silhouette of her body into a representation of a violin.

The title translated into English is ‘Ingres Violin’ an idiom for someone who is very talented in their chosen hobby. Ingres was a passionate violinist and well noted for his skill on the instrument.

When Man Ray added the F holes to the print, he changed what was a fairly normal photographic nude into something deeper. The title gave it even more depth, was he suggesting that Kiki was nothing more than a hobby for him, the two were lovers for most of the 20s, or was he hinting at the dark tension between sitter and artist that is implicit in any nude.

More likely Man Ray just thought of it as way to marry the traditional nude with a touch of surrealism. A violin is shaped like a body so why not turn a woman into a violin?